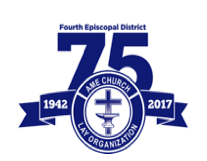 In 1935 the first attempt was made to organize the laymen all over the Fourth Episcopal District. They assembled in Chicago, Illinois at the Grant Memorial African Methodist Episcopal Church and perfected an Episcopal Lay Organization for presenting a solid front at the 30th Session of the General Conference that was to be held in New York City in May of 1936.

In November of 1942, the Fourth Episcopal District Lay Organization as we now know it, came into existence at historic Bethel African Methodist Episcopal Church in Indianapolis, Indiana of which the Rev. J. A. Alexander was Pastor. Laymen from all over the District attended this meeting.
They formed a temporary organization, elected a temporary chairman and appointed a Constitution and Bylaw Committee. This temporary meeting was scheduled to meet at Grant Memorial African Methodist Episcopal Church, Chicago, Illinois in July 1943, at which time the Constitution and Bylaws for the permanent organization was adopted and William Entzminger of Detroit was elected President for a four-year term.

Since that date, the Fourth Episcopal District Lay Organization has met annually in July since its formation. During these early years many of our ministers were not in harmony with the Lay Organization and many of the laity of the church were looked upon as rebels.